Here's some new images of DefianceIndustries' slick Thunderbolt model cruising through space in the Vision Engine. When we last reported on the ship, there were several miscellaneous issues to be worked out, but those kinks have now been largely resolved. Now that the Thud is functioning properly, DI can shift is focus to the newer Prophecy-era designs that remain to be modeled! 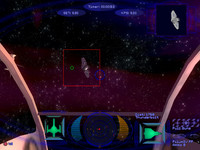 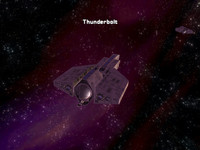 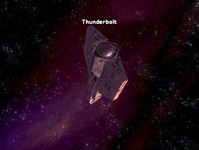 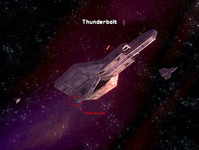 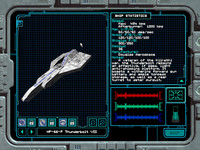 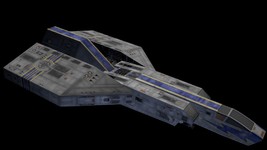 Fixed the Tbolt turret issues. Turns out that the mass laser fire was caused by a PEBCAK error. When I exported the mesh, I somehow failed to check all the hardpoints. So the turret barrel actually had all the gun hardpoints that the base mesh had (all 9 of them in addition to the two for the turret) so it was a mega-turret of death! Once I cleared out all the hardpoints except for the two for the barrels, the ship started firing as expected.

I also fixed the rotation issue, the hardpoint that joined the barrel to the base mesh was off causing the barrel position to shift off the mesh as the turret rotated. There is still a clipping issue (see image) caused by the fact that the original barrels were mounted on the turret dome and not in a swivel mount beneath the cupola. I'll tinker with the rotation matrix and see if I can iron that out. (@gr1mre4per 's turreting tool to the rescue!!)

A couple of last errata on the Tbolt: The original WCP scaling was waaaay of on it. The Thud should have a length of 34 meters, but the original mesh is only 16. The new Tbolt is sized properly at 34 making it slightly larger than the Excalibur at 32m. I also tweaked the specular map a bit, the cockpit was waaaay to shiny for my taste, so I dimmed it up a bit.