Joe Garrity from the Origin Museum has run across a really cool print article from an August 1998 edition of the Austin American Statesman. It's a story on the revolutionary episodic release of Wing Commander Secret Ops. They explain how new parts of the game can be downloaded each week and that they'll be supplemented with additional storyline on the web. The infamous CIH virus infection also comes up. Some of the article's charm also has to do with how they treat the internet as such a novelty. Gamespot.com is specifically described as a "gaming news Web site." Of course, the biggest issue at first had to do with how long the starter pack was. They talk about the wait associated with a 63 megabyte download, but all the serious Wingnuts waited all night for the full 114 meg starter to finish. There's also a mention about Chris Roberts' upcoming Wing Commander Movie. These were exciting times! 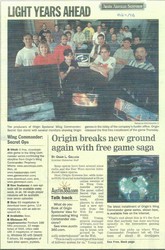 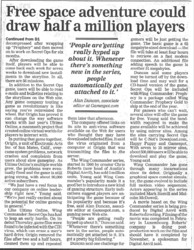