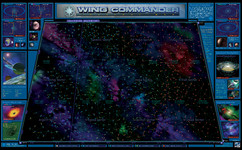 Happy New Year to Wing Commander fans everywhere! We hope 2013 has been terrific for everyone so far. The traditional New Year's poll is up, asking what kind of year you think is in store. Wing Commander's sales performance on GOG has been pretty stellar, and hopefully that will result in more titles being released on the service in the months ahead. The WCPedia will continue to grow thanks to volunteers like you, and renewed excitement and interest brought on by Chris Roberts' new endeavors are sure to benefit our community and all the various fan projects. This year will also mark the CIC's 15th birthday, and there will be some fun things in store. Thank you for sticking with the CIC year after year. Let's make our 15th year the best yet!

The last poll asked about your favorite fighter to fly in the original Privateer. The Centurion was a strong winner as expected, and the Galaxy seemed notably more popular than either the Tarsus or Orion.