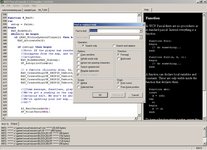 Kevin Caccamo has created a new tool to make modding Wing Commander Prophecy & Secret Ops easier. Big projects like Standoff with experienced modding teams might be what come to mind when you think of Vision Engine editing, but there are many smaller groups and individuals poking around at the code. Look no further than Lt.Overload's Missions, danr's Standoff mods or WC Collateral Damage for some recent examples. Kevin's program takes .OBJ files and turns them into Pascal code which can be used by WCPPascal. Try it out here!