We have purchased a little bit of Wing Commander history and are passing the information on to you! Artifacts from the Origin Museum are currently being auctioned on eBay which has the excellent effect of revealing some interesting Wing Commander material we did not know survived! In this case, a set of twenty seven polaroids from Wing Commander IV's Second Unit shoot which are full of fascinating behind the screens and lore information, including some better-than-ever looks at some of the game's different costumes and never-before-recorded identities of various background characters! We're studying each polaroid and collecting what we can about how it relates to the game and will be updating one at a time. Wing Commander IV's Second Unit shoot took care of things like shipboard transitions and comm videos. In the case of the latter, actors were typically filmed in front of a single small backdrop intended to imply a larger space station, military bunker or capital ship bridge. Our hope is to identify as many of the actors and roles as possible and then tell you all we can about them.

Our first snapshot was the easiest to identify: this is Todd Covert who the game credits as "Bluepoint Traffic Control". Players will immediately recognize him from one of the first comm videos where he welcomes you to Bluepoint and gives you permission to land at the end of the first mission. We can see from the polaroid that he is wearing a "Tiger" nametag, which is something we will find on a number of Wing Commander IV extras (the nametags could be easily swapped so that one costume could be used by multiple characters). Here's an in-game shot of his appearance: 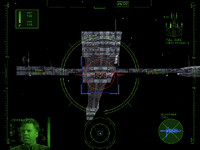 In the polaroid he seems to be standing in front of a MIP, giving us a close look at that set. In the game itself, his backdrop seems to be one of the same 'computer walls' used in the Lexington's briefing room (a logical choice as the Lexington and Bluepoint would share similar systems and aesthetics). Where are they know? We were excited to learn that Mr. Covert is still acting! He has had a lengthy and well respected career, largely on stage rather than film. You can access an interview about his career here and you can find his official website here. 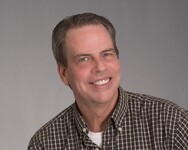