The BBC has reported that actor David Warner has passed away at age 80. To say that Mr. Warner was prolific would be an understatement; his stunning, sixty-year career had him effortlessly jump from lead roles to villains to supporting character roles. The genius of David Warner was not simply in his spectacular talent but in his willingness to apply that talent indiscriminately. He was as at home playing Lysander as he was ruling the Klingon Empire or acting in front of a CD-ROM's green screen. He brought the same deep dignity, respect and talent to every performance. Here was a man who could move effortlessly from a movie bound for Mystery Science Theater 3000 to the biggest, most acclaimed film of the decade (1993's Quest for the Delta Knights and 1997's Titanic, respectively). He elevated the material with every bow, impressing generations of genre fans who knew him best for the likes of Tron and Star Trek. Wing Commander fans knew him as one of a rare group who played multiple roles in our universe, with wonderful turns in both Privateer 2: The Darkening and the 1999 Wing Commander film. 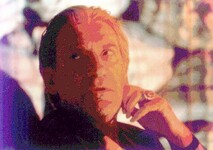 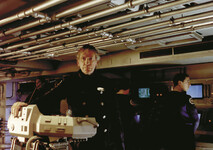 "Remember, once a wolf always a wolf..."

Warner first joined the Wing Commander canon in 1996's Privateer 2: The Darkening, the series' third full motion video title. Warner played (code name) Rhinehart, one of Kronos' top consiglieres and a key leader of the evil Kindred. Much of the game's story is spent learning about and then ultimately capturing Rhinehart, who holds the secret to Lev Arris' lost identity. In a massive cast packed full of superstar character actors (and a future a-list of a lead), Warner manages to stand out not only for his performance but for the importance to the story for which his sheer presence is required.

After a dozen missions spent learning his whereabouts, Rhinehart finally appears in the game's explosive climax. Here David Warner is tasked with what seemingly came so effortlessly to him: elevating material with his very presence. In a tense interrogation with with lead Clive Owen (Lev Arris) and Christopher Walken (CIS Commander David Hassan), Warner reveals everything the player has been seeking: his true identity, who is behind the evil Kindred and their ultimate plan for domination of the Tri-System. Who but Warner could effortlessly and believably reveal in just a few lines that you had been frozen by your previously unknown crime lord father to protect you from your similarly previously unknown twin brother who has become insane from an addiction to age-increasing drugs. Warner could make material that might have been best at home in a soap opera seem as natural and real as the setting required.

"We need a resounding victory, or this war is over..." 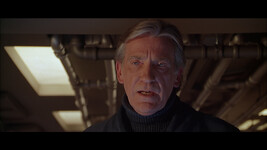 So begins David Warner in the first shot of the first trailer for Wing Commander (1999): "[Earth Command] don't believe they can withstand a Kilrathi battle group without the support of the fleet." Here, again, Warner was tapped to lend his grandeur to another intergalactic endeavor: the role of Admiral Sir Geoffrey Tolwyn in the film. As the august commander of the Terran Confederation's Fourteenth Fleet, it is Tolwyn who intercepts Pegasus' drone and dispatches Lieutenant Blair to save the galaxy. 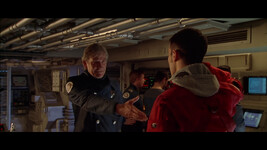 The character of Admiral Tolwyn was first introduced in 1991's The Secret Missions 2: Crusade and went on to become a key part of the WIng Commander world. Origin Systems' Vice President of Sales Marten Davies originally voiced the character in Wing Commander II and Malcolm McDowell performed the role in Wing Commander III, IV and for thirteen episodes of Wing Commander Academy. Malcolm McDowell was originally set to reprise the role in the film but was forced to drop out when his Fantasy Island reboot was picked up as a series. Warner, who had famously co-starred alongside McDowell in Time After Time (1979) stepped in and made the role his own. 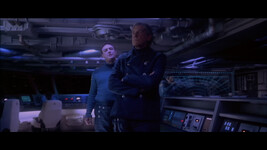 Warner's plays Tolwyn as a wise, stoic fighting commander who feels like he would be equally at the helm of an age of sail frigate, managing also to come across as something of a father figure to Freddie Prinze Jr.'s Blair despite sharing a set with him for only one concluding scene. As in The Darkening, Wing Commander relies on Warner to make sense of the story for the audience, featuring him in several essential cutaway scenes that serve as small pauses to properly establish the narrative. Primarily paired with John McGlynn's Commodore Richard Bellegarde ("I'm bloody well aware of that, Richard!"), Warner gives the film both purpose and pace. Perhaps the simplest tribute of all to his mastery of the role is the fact that though the film was notably ravaged by fans for recasting familiar characters, seemingly no one took issue with Warner's Tolwyn.

To end with a short personal recollection: I was lucky enough to meet Mr. Warner at Dragon*Con 2013. I was working the convention to promote Star Citizen and opted to skip lunch for a rare chance to meet both Admirals Tolwyn who were both signing autographs in a hotel ballroom. The line for Malcolm McDowell was long and took about half an hour; he was friendly but clearly busy and had to move quickly to serve his considerable crowd. David Warner, sitting under a banner showing him in alien makeup from various Star Trek roles, had no line at all and I was nervous to approach him because there would be no one waiting behind me. I shouldn't have been: he was the kindest, most effervescent convention celebrity I ever met. It is absolutely no fun to sit in a sweltering room packed with thousands of autograph seekers in every direction and one can never fault celebrities for their willingness to make such an appearance, but Warner seemed genuinely interested to chat with me, which is either a tribute to his dignified patience or his ability to act. He explained to me that he had never seen the final cut of Wing Commander and did I like it? Did I remember his part? What did I think of how he'd played the Admiral? He recalled being so impressed with the sets and costumes, presumably recalling the Concordia's battleship bridge and his naval sweater and peacoat. While his old co-star had happily signed my copy of Action Stations (a fictional biography of the Tolwyn character) without question, Warner was seemingly fascinated and wanted to know what it was and what the connection to him was. It was a small, memorable encounter that I'm so happy to carry forward with me. To paraphrase that same book on the subject of that same character: kind soul, may you rest in peace. 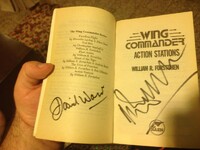