Geraldo Rivera Rivera sent in this snippet of a wonderful OK PC magazine review for Wing Commander Academy. There's a lot to like in this article. First off, it's a Spanish magazine, so we get a slightly different take on early '90s Wing Commander compared to the standard fare. We got a peek at this version of Academy via DROSoft translation earlier this year. Secondly, it's a full four-page spread dedicated just to Academy. Without context, people today might blow WCA off as a simple mission builder, but at the time, this was a revolutionary way for fans to create their own missions. It was something fans were clamoring for and absolutely warranted being a standalone boxed product that people would run out and buy. At twelve years old, I put a lot of hours into mission building and loved the flexibility to pick ships and wingmen at will. Finally, from a magazine layout point of view, I like what they did by splicing up the interface into panels that highlight the customizable objects. The emphasize on the the Wraith and Jrathek is also awesome! 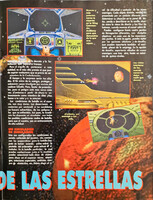 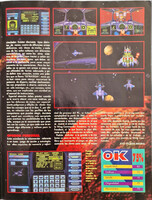