This has been a really good year for space toilets. AD managed to screen cap some really good shots of the toilets in the Wing Commander Movie a couple months back, and now LOAF has discovered the Wing Commander Academy equivalent. Or rather, since this is Damon Karnes' holding cell from the episode The Last One Left, these are borderline space holes-in-the-ground. He recently got ahold of a concept art piece which shows a pair of basins at the foot of their cell beds. From this angle, their purpose seems fairly obvious. They're actually pictured in the episode itself, but with all the other action going on, nobody has ever called these out as far as we can tell. Now you know!

This is a Wing Commander Academy concept painting. These were done in the US as reference for animators in Japan and Korea painting the production backgrounds. It's from The Last One Left and reveals the pirate prison has space toilets I would never have noticed! 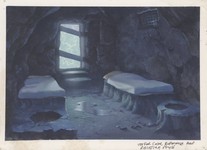 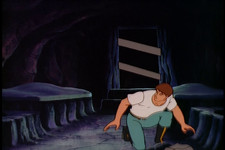 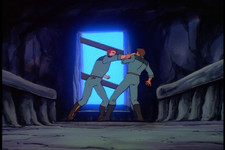 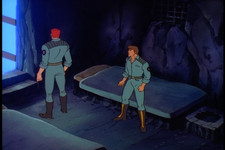