L.I.F. has begun outfitting the internals of his TCS Victory model in From the Depths. When complete, players will be able to explore the decks of the carrier and see all the familiar hot spots. There have been a couple projects that have started to do this in the distant past, but none got very far or had a whole lot of detail. Being able to freely walk around the inside of a Wing Commander ship is a tantalizing prospect, much like the enhancement between the old Myst game and RealMyst upgrade. There isn't a whole lot to see yet, but the first preview below is promising. You can make out the ship load out console, trainsim, flight control terminals and exits to the briefing areas and flight deck. The adjacent compartments are in work and will be up next! 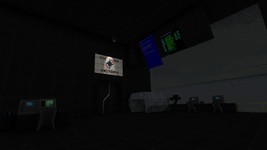 And I've started working on the internals, starting with the ready room. Small level of detail as of now, since I'm not sure yet whether I'll have to redo a lot of stuff to stay within the hull limits (for example, I'll have to reduce its depth to get the payload computers closer to the briefing room's door before spending too much time on getting the lighting and the details right).

The doors to the briefing room are working, though I haven't linked them to logic systems and buttons yet, same for the glass door leading to the stairs set going down to the flight deck. Next step will be the briefing room and the CIC, then the elevator linking the various decks in the conning tower.