Pedro reports that work steadily continues on the WC4 Fan Remake project. Although he claims that all of the various technical hurdles they're facing aren't news, I would argue that this provides important context to just how complex managing a modern fan project can be. A great many projects hit a wall and fail to progress beyond this point when the excitement of a flashy launch fades and the technical foundation work grinds on, so it's wonderful to see that the team is facing these challenges head on. What they've already accomplished is pretty neat too! Check out the trailer below for a sample. 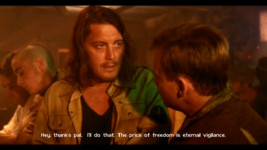 Wing IV is fighting a lot of unexciting battles on multiple fronts - loading gameplay scripts to in order to load FMVs you've already seen, which requires loading subtitles, and branching options - which you've already seen but need to be implemented anyway. And then there are tasks like updating the particle editor to make it more user friendly.

And after that I'll still have to update the effect/material editor. That's not even mentioning other boring stuff like task/bug boards, a new server to allow us to use more than the 1GB of assets we were limited to for the demo. We are trucking along; there is just a *huge* amount of boring groundwork to lay.