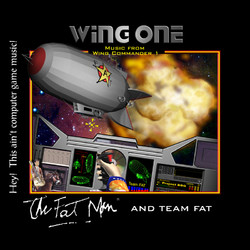 AD recently found a music-related podcast that's profiled Wing Commander 1. They listen to the Sound Blaster basic music and then compare it to the deluxe Roland MT32. The hosts seem to be more versed in music history rather than video game history, which provides for kind of an interesting analysis. They also profile the movie Creed's score in this episode, and they jump back and forth between that and Wing Commander repeatedly, which is certainly an unusual format choice. The whole bit is more than an hour and forty minutes long, but it's always neat to hear some great WC tunes and some fresh admiration thereof as well. Give it a listen here. Afterwards, if this gave you a hankering for Team Fat's masterpiece work, you can buy their Wing One album at Amazon ($7.99) or iTunes ($9.99).

This is episode 18 which is basically our glorious comeback (again) into a more constant rhythm. Let's see how that goes. Anyway we present to you this time the Ludwig Göransson score to the 2015 Film Creed by Ryan Coogler as well as something very special. Do you remember episode 12? (Sure you do, silly old me). Well this was the one where we presented two different versions of the Castlevania 3 soundtrack. This time Krazy Kaptain Khalid does something similar. Here he is himself describing what happened: "So, I more or less glued two mp3 files together, so that they appear as one and I just have to run that one file instead of two. In the beginning of those "combined" files we hear for about the first minute, the version that probably most of PC players in the early 90s heard at home with their Sound Blaster cards, the Ad-Lib or OPL2 version. The second part is the more sophisticated version with the more expensive Roland MT32 General MIDI Synthesizer. If you're interested in that kinda stuff, you should totally check out the youtube channel by "8bit Keys". Great guy, great videos, fun to watch."

He does that with tracks from the 1990 Chris Roberts PC game Wing Commander which were written by George Alistair Sanger aka "The Fat Man".