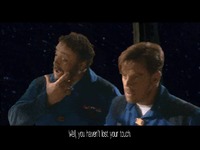 The Guardian has posted an interesting article on the strangest star cameos in video games. It's an interesting lot. Even the bad cameos are fascinating in their own way. Mark Hamill is included on the list for Wing Commander 3, and both John Rhys-Davies and Malcolm McDowell are mentioned too. Wing Commander actors indirectly dominate the list as both John Hurt and Tim Curry are mentioned for their roles in Tender Loving Care and Command & Conquer 3. Hurt played Joe (Kane) the Bartender in Privateer 2 and Curry was the voice of Melek in Wing Commander 3. I'm very surprised Clive Owen didn't make this list! Check out the full article here.

Ten years after Return of the Jedi, “Luke Skywalker” Hamill made his onscreen video game debut in this science fiction epic from Origin Systems. Mixing interactive space battles with quaintly low-res cinematics, the game starred not just Hamill but Malcolm McDowell and John Rhys-Davies playing the almost identical roles of “British character actors wondering how they got here”. At the climax of the game, Hamill’s character, space hero Colonel Christopher Blair, must destroy the evil Kilrathi army by … flying his fighter craft along a fortified trench then delivering a bomb.