WC modder Pedro - of Unknown Enemy and WCP OpenGL fame - has released an image that shows off some of the ships for his WC4 remaster project. The effort has been hinted at for some time, but as more high quality assets are completed by DefianceIndustries, the project as a whole becomes more feasible. After some extensive planning, Pedro is ready to soon get started on the programming side. He's using the Usagi engine due to its modularity and ability to recreate the feel of the game. Despite their popularity, WC3/4 have historically had fewer directly associated fan projects than Prophecy/Secret Ops. It's great to see the whole breadth of the series getting attention these days! 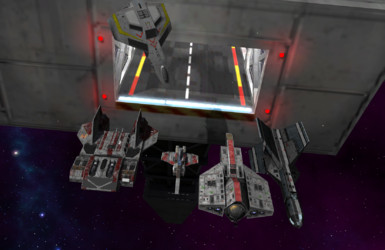 Defiance has been passing me models for the WCIV remake. Not too much to report, I spent most of my time getting the engine ready for a new project but it's about time to start.

I was hoping to more closely match the lighting with Blender before showing another shot but I've been pretty busy. Still the exporter can at least import the hundred or so lights Defiance set up on bluepoint station, and the materials come through correctly without setup. Texture resolution on bluepoint is a bit low, not using particularly high res textures yet as not to burst the bandwidth limit on the git rep.