The Homeworld Remastered Mod has gotten another update to more fully implement the fuel & ammunition mechanics that L.I.F. has been working on for some time. There have been some intricate coding hurdles that had to be scaled, but the results seem to add a nice dynamic to the fighter/bomber versus capship style of play. The game still looks great as well! You can grab the update via Steam Workshop here. 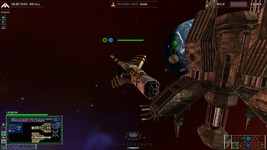 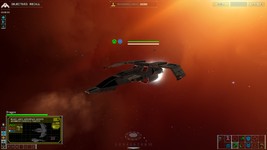 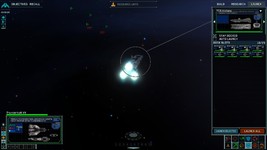 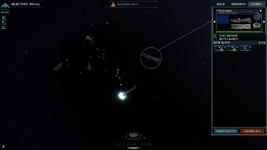 The Steam version of the main mod has been updated to the 2.5 version of Flag Commander, which is defined by complete rework of the ammunition and fuel management system.

As you can see in the screenshot above, there is a new feature appearing in the unit screen on bottom-left. In the vanilla game, you can see three stats items, the speed (green arrow), average damage per second (red target) and HP (blue shield). From now on, however, there are two more items for fighters and bombers, the remaining fuel indicator (radioactive sign) and the torpedo indicator (small torpedo below the fuel sign).

Most fighters/bombers have limited fuel, in different amounts, with crafts like the Arrow being able to patrol for a long time compared to other ones, for example. Now, however, you'll be able to see much more effectively the remaining fuel in a given plane (I'll try to have a fuel bar present at all times in a later update). The big change was in the way torpedo launches are accounted for, given that there is pretty much no built-in feature in the game to allow this.

The new system is currently only for the Wing Commander III and IV factions, the I and II waiting a bit for some feedback. You'll notice that some crafts do not have limited fuel, such as the Excalibur, Dragon, Asteroid Fighter, Sorthak, etc., which give them another tactical use compared to cheaper alternatives (note the "N/A" on the second picture). Oh, and since I was on a streak, I went back on the solo mission I made a long time ago and updated it to work again before uploading it in the main mod (the upload should be online in a few minutes from the time I post this). The whole ammunition schtick should be really interesting for campaign editing.