Who says print is dead? In 2669, Major Todd "Maniac" Marshall, eternal teenager, still has a stash of printed pornography in his locker. When you chat with him in the barracks during the Blackmane series he takes a break from reading an issue of 'Playpen' magazine to tease Blair about flirting with Rachel. Is Playpen something created for Wing Commander III or is it the real 1980s magazine it appears to be? (And if the former is the case, why didn't they use the already-established Playboy parody "Plaything (tm)" from Privateer?) 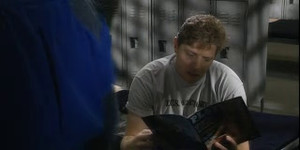 Long story short: it's not real AND it wasn't created by the prop department. There are often legal issues involved with showing real products on television and in film. Take a close look at any popular sitcom and you'll find that what look like real groceries, magazines, books and posters are actually careful knockoffs that resemble (but are legally distinct from) familiar items. These fake products come from a company called Earl Hays Press, which has been keeping a ready stash of designs capable of suiting any production for over a century. In the case of magazines, productions can choose from a variety of already designed front and back covers and can even add real-looking prefab text if the interior needs to be shown. In Maniac's case, the Playpen he's holding's cover is a combination of the 1994 versions of MM-91 ("Centerfold of the Year Bobbi Brenner Reveals All") and MBA-32, an advertisement for "Nature's Champagne."

Issues of 'Playpen' appear in dozens and dozens of television and film productions from seaQuest DSV to The Partridge Family. In fact, Maniac's exact issue had a highly visible role in a 1998 episode of Friends. Hard to imagine it survived 671 years and made it from New York to the front lines of the Vega Sector! For more information on prop magazines and other items, you can find a catalog of Earl Hays Press' current offerings here which makes for a fascinating study! 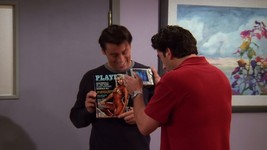