Hull Textures... By The Numbers

Hull numbers are hard. The Wing Commander II box has a beautiful rendering of what should be the Concordia under attack... but it has a huge 14 instead of the 65 seen in the game! How did that happen?! End Run features what should be the escort carrier TCS Tarawa. Except it says 12 and this is literally the second sentence of the story: "The carrier off his port quarter was the newest addition to the fleet, emblazoned upon its armored bow the proud name CVE-8 Tarawa..." Several cutscenes in Wing Commander IV accidentally swap the Vesuvius and Mt. St. Helens hull numbers. Vesuvius should be 01 and the St. Helens should be 02. This was bugged by QA but there wasn't time to render new cutscenes (which required days on an SGI machine at the time.) 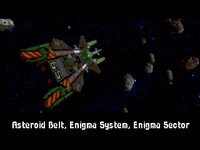 One neat trick in Wing Commander IV is that individual ships can have unique skins in engine. That’s common today but it felt luxurious at the time. The Lexington is CV-44 and the Princeton is CV-48 (that’s the carrier being repaired later in the game, named by the novel.) They also retextured ships for different factions. Compare the frigate as operates by pirates, the Border Worlds and Confed.

The WC4 frigate (Caernaven class, again from the novel) was intended for WC3 but was cut. It’s still hidden in the game files! It was planned to be the ship that delivers Paladin in the Alcor series. Instead he arrives on a destroyer that has been renamed FRIGATE! 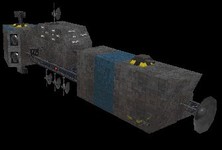