Looking Back at Confed's Space Force

There's been a lot of talk about the "space force" in the news lately, so we took a look back at the origins of the Terran Confederation Space Force. Where do they come from? Wing Commander's Space Force is a retcon! There's no mention of it in WC1 or 2. It was created for WC3 to explain why the earlier games used a mix of Army and Navy ranks (for instance, General and Admiral.) Here's the design doc that introduced the idea:

In lore, the Space Force seems to be a subset of the Navy. Blair and Maniac attended a Terran Confederation Space Naval Academy and then went on to receive specialized flight training at the Space Forces Flight School. Transfers between the two groups are possible. The Space Navy, then, seems to have developed from the United States Navy rather than some new branch of the military; the Terran Confederation Naval Academy on Hilthros continues many Annapolis traditions and is said to have an eight hundred year old honor concept. Here's the Space Force insignia on a Rapier; it was created as set decoration for the Wing Commander movie (where it wasn't strictly necessary as the film gave everyone Navy-style ranks.) 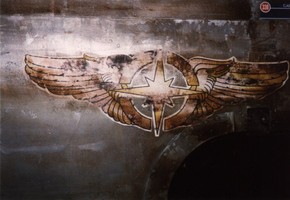