I Dream of Genie 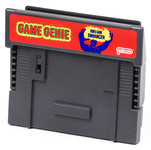 The Game Genie was a 'cheat' utility for cartridge-based systems developed by Galoob in the early 1990s. Game Genie hardware would act as a physical bridge between a game console and cartridge, allowing players to enter codes that would alter specific memory values in a given game. This would alter the game while in play, making changes to values like number of lives, amount of ammunition and the like. To allow the device to remain up to date with current releases, Galoob published a quarterly "Code Booklet" that listed cheat options for the latest titles. Three issues of the Super Nintendo code updates added listings for Wing Commander and The Secret Missions: "Vol. 1, No. 2" (Wing Commander,) "Vol. 2, No. 3" (The Secret Missions) and "E2C" (a compilation which reprints the codes from earlier booklets.) Scans of the Wing Commander enries are available below. Note that these codes are still useful for those running the games on modern systems; Super Nintendo emulators typically include an option to enter them. The codes for Wing Commander are specific to the Hornet and Scimitar while the Secret Missions selections have a much broader impact on the game. 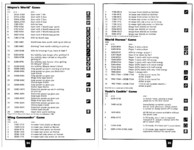