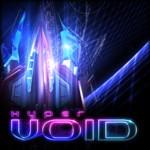 Here's a weird one: Hyper Void is a space-based 3D shooter game from InFramez Technology . It was originally released for the Playstation 3 in 2015 and is now available for the PS4, Xbox One and Windows PCs. In an interview with Montreal game development magazine Le MooQC the game's creators Homam and Wessam Bahnassi talked about the game's unusual connection to the Wing Commander universe! Asked if there are any Easter eggs, the developers note that "the shipwreck in level 09 belongs to the Lexington from Wing Commander 4. One of the quotes in the story mentions 'cats and insects.' The guy is referring to the Kilrathi and Nephilim races (from Wing Commander.)"

You can find the game's story text here, which includes the mention of cats and insects. The story itself is about a space virus which the player must fight in a variety of environments using his starfighter. The wreckage of the Lexington appears in Level 09 which can be seen in this YouTube playthrough. It's hard to tell exactly where it is; the original printed magazine included a low resolution image of the entire ship, but the version included at the Hyper Void website and in the game is much more broken apart. While Hyper Void is not an Electronic Arts game, it was the first project from a team that had formerly been EA Montreal... perhaps these assets were once intended for another purpose! Want to hunt for the Lexington yourself? Hyper Void is a digital-only release, with links to each version below. There is an additional patch available for free which allows you to play the game with the Playstation VR headset. 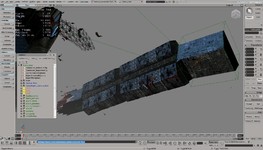 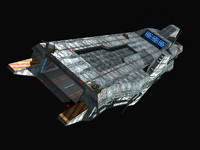