If you're tied into the Apple ecosystem, then there's a good chance you've encountered a billion ads for discounted iPads and similar products as you navigated the Black Friday holiday salescape this weekend. But if you were to roll back the clock by twenty-one years and put yourselves in the shoes of a Mac customer in 1996, you'd have seen some significantly different products. One of them would have been this official "Apple Quality Bundle" "For Serious Gamers." The Extreme Fun Pak is six different games from the mid '90s. And since it's pretty hard to imagine that Diamonds 3D ever took any hardcore gamers into the realm of intense action, Wing Commander 3 is decidedly the winner of this bunch. It still holds up well today, of course, but we've sure come a long way!

Today I learned Apple published a complication that included Wing Commander 3... with the most 1996 box art ever. 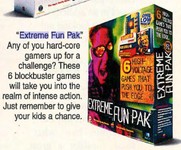 "Extreme Fun Pak." Any of you hard-core gamers up for a challenge? These 6 blockbuster games will take you into the realm of intense action. Just remember to give your kids a chance.

Did anyone get any good Black Friday deals?