The newest version of the Prophecy and Secret Ops Model Upgrade Pack has been released! It includes a whole pile of exciting ships that have been gracing the news over the last few months. There are additional bug fixes as well as some new features to smooth in-game graphical loading. And if you dare, there's a tantalizing new option called 'ultraNightmare'... Grab the new update here! (75 meg exe) 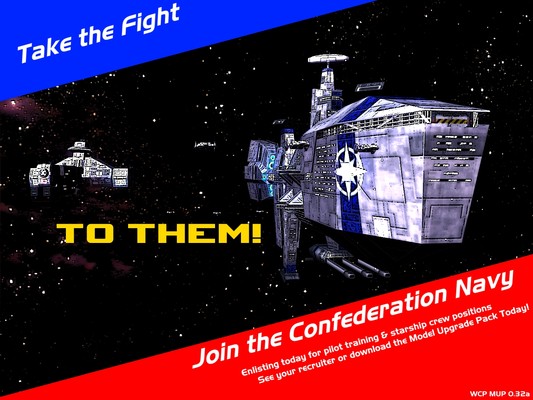 It's MUP Release day! Version .32a is packaged and ready for you to try! Changes in .32a:

WCP Unlimited now includes new features for pre-loading materials and bitmaps. The intent is to correct the "pause" that occurs in-game when ships are dynamically generated (ie. second waves, ships that jump in, etc.) This will minimally increase load times at the start of missions, but will provide a smoother and more stable in-game experience. If this causes instability you may disable pre-caching by adding the following lines to your WCPUNL.cfg file:

For those pilots who think they have the sand for it, try adding the following setting:

What are you waiting for cadet?