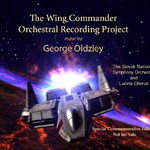 It's the final day for George Oldziey's second Wing Commander album campaign. With the project already given the go-ahead, any further proceeds will help potentially get the planned digital reorchestration turned into a live affair. While that option is still probably a ways off, be sure to get your contribution in ASAP if you want to make sure to be able to get the second album as soon as it's made!

Greetings all! With a little less than 24 hours left of the campaign we are comfortably over the goal, with some extra funds available towards the next phase, which would include paying for the musicians, recording engineer and conductor. I'm am more than thrilled with this wonderful start! And I am also thrilled that I will indeed be able to bring you the MIDI mockups of the eventual recordings as well as live recorded bar music in both CD and download form, as well as score PDFs for those who pledged at that level.

Many thanks to you all who not only pledged but obviously helped get the word out! You are the best!