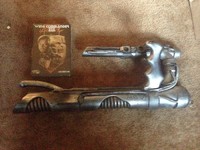 The Kilrathi rifle, pictured here, was one of the few real props created for Wing Commander III's film shoot in 1994. It is visible in the background of throne room scenes, where you can see it carried by a fearsome Kilrathi guard. For the 1999 Wing Commander movie, the rifle was redesigned and given a name and backstory. From The Confederation Handbook:

The standard Kilrathi sidearm in shipboard operations is a light-energy weapon called the Dor-Chak (“Striking Bird”) in the Kilrathi tongue. It usually weighs about 6 kg, and measures 29 cm from barrel-tip to the end of the stock. (Some clans wield variant Dor-Chaks, which may look somewhat different from the standard model, but most function virtually identically.) It is believed that the Dor-Chak, in its modern form, was developed by the Kilrathi 50 to 100 years before contact with humanity.

The Dor-Chak is a multifunction weapon. There's a short-range, wide-beam setting (good for about 10 meters against unarmored targets, with a spread of about 2 meters), a long-range narrow-beam setting (able to penetrate an unarmored human target at 200 meters), plus a 1-meter torch mode, for cutting through hatches and bulkheads. Its crystalline power supply is good for about 20 minutes of continuous use, after which time it must be discarded and a new one slotted into place. Most Kilrathi warriors go into battle carrying at least five fully charged power supplies for their Dor-Chak.

Confed's M-47 semiautomatic laser, which is quickly becoming the standard weapon for planetary operations, is based directly on technology originally created by the Kilrathi for the Dor-Chak.

We hope the rifle goes to a good home! You can pledge for the Wing Commander Orchestral Recording Volume 2 Kickstarter here.