There's music in the air... or, at least, we're getting closer! Wing Commander III, IV and Prophecy composed George Oldziey is continuing to make preparations for his next Wing Commander album crowdfunding project. He's planning to launch the campaign in May. On March 17th, he tweeted:

Next up on the orchestration schedule an intense battle medley from #WingCommander 4. Will be launching next campaign for volume 2 in May!

On Saturday, he reported that the orchestration for a Wing Commander IV piece was finished... and he shared a picture! Take a look: 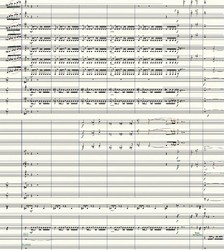