A while back, LOAF managed to snag a prototype of Wing Commander for the Super Nintendo off eBay. This general purpose game pak originated at MindScape, who were responsible for porting both Wing Commander and Secret Missions to the Nintendo console. It has room for two EPROMs that contain game code and some SRAM memory that could potentially serve various purposes, notably keeping savegames alive when paired with a battery. The CIC chip prevents piracy and facilitates region lockouts. 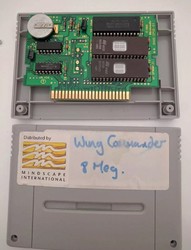 Wing Commander for the SNES doesn't have a true save feature. Instead, the game generates codes for keeping track of your progress, obviating the need for SRAM and battery. The circuit board used in production copies is a lot smaller: it only has one EPROM chip (sufficient to hold the program code) and a CIC chip for security.