As many of you skate into what's hopefully an extended weekend, check out this Nephilim interceptor from Dark Sentinel. The image below shows a comparison between the original and his upgraded version, which is nearly a ten-fold polygon increase. All the smoothness gained here significantly helps the organic feel that the ship should have. This one's untextured, but DS does some really nice Nephilim skins that I'm sure will look great. He also promises fully conjoined Skate Clusters at some point in the future! 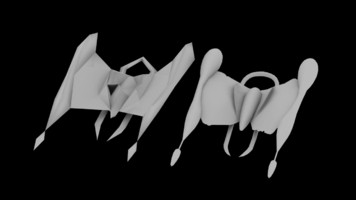 There's bombers in a thread near here. They can't be left unharassed. There's Moray for that and Manta as well, and now this very agile interceptor. 229 -> 1964 polies for now. Final result may be more or less, depending on how the UVing goes and how much would I be able to clean it up. Clusters coming later.