Longtime Wing Commander documentation master David Ladyman has just kicked off a new project and would appreciate support from fans of cool sci-fi board games. Nearly thirty years ago he created Star Traders. In it players compete to pick up and deliver cargo across the galaxy while managing their income and investments. Mr. Ladyman reclaimed the rights a while back, and with the help of Cloud Imperium Games artist Ryan Archer, is attempting to refresh, enhance and reproduce the game. One really nice aspect of Star Traders is that there are different complexity levels built for people who want a shorter experience or are playing with kids. Alternately, optional rules can be engaged that extend the length to several hours for serious gamers. I love tabletop games and I'm a big fan of his work, so I've contributed my part to make the game a reality! As of this writing, there are about 100 "early bird" slots left where people can get a copy of the final game for $40 rather than $50. Find more info here. 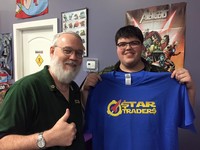 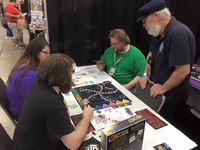 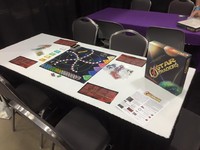 In honor of the campaign, LOAF has put together a list app article highlighting some of the top David Ladyman appearances in the Wing Commander series. He joined Origin in 1991 and did writing, editing and formatting work on just about every Wing Commander game from Wing Commander 2 to Prophecy and beyond - so he pops up in some pretty interesting places! Check out the post for pictures with context.