There’s a star system named after me in the Wing Commander universe. It’s the result of an overworked designer at Origin needing to fill a giant map with hundreds of names quickly, but it may still be the single thing in my life that I’m most proud of. But where there were hundreds of systems to fill in, there were only a handful of encompassing quadrants. They reserved the names for real legends: there’s a Roberts Quadrant, of course, and then each of the executive producers got one… Mark Day, Rod Nakamoto, David Downing, Adam Foshko.

And then a select few Maverick team members had the honor. Ghorah Khar, the treasonous Kilrathi planet from Wing Commander II, is located in the Isaac Quadrant, named after the genius behind the RealSpace engine. The Ladyman Quadrant, named after Origin’s master of manuals, encompasses the Terran Confederation’s leeward expansion. Half the battles of the original Vega Campaign took place in the Douglas Quadrant, after the man who redefined the look of the series’ ships in Wing Commander III. And my star, the Lesnick System? I’m proud to say it’s located squarely in the middle of the Shelus Quadrant.

Pete Shelus started his career at Origin working on Tactical Operations, the Strike Commander mission disk and quickly proved his mettle. His credits on Wing Commander III are confirmation of the whizbang engineer he’d quickly proved himself to be: “Polygonal Collisions,” and “Math & Algorithms Consultant.” He went on to help out with Wing Commander IV and to serve as lead programmer on the 3DO port of Wing Commander III, still to my mind the single greatest after-the-fact PC-to-console conversion ever developed. He worked on the plan for Chris Roberts’ aborted version of Privateer 2 and when Chris to form Digital Anvil he became the Maverick Team’s lead programmer on the so-technically-ambitious Wing Commander Prophecy. After all that, he went on to keep creating worlds with Warren Spector’s teams at Ion Storm and Junction Point.

But that’s all on MobyGames. I’ll tell you right here that Pete was someone special. One of my happiest memories was visiting Origin back in 1998, shortly after the Secret Ops release. Pete was one of a handful of Maverick Team members present that day, and he treated a scraggly teenage fanboy who was almost too nervous to speak like he was just as important as any journalist or executive producer. That meant so much to me at the time, and I try and carry it with me to everything I do today. By all accounts, that was the universal reaction to him. Check out his February, 1996 ‘Employee of the Month’ submission from Origin’s internal newsletter: 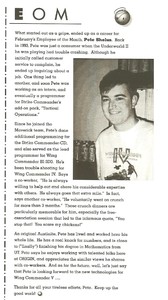 
We stayed in touch, over the years, and he was always kind enough to answer some esoteric Wing Commander technical question or clear up some other bit of trivia from the old days. Long after anyone’s involvement with the franchise was a distant memory, he was still so gracious as to make it seem like you were making his day by writing to him to ask about this-or-that.

Several years back, after another one of these all-too-common tragedies, I put out a call for memories of the great 3D artist Paul Steed. Pete was among the first to reply with memories of his friend, and I sent him a note with my condolences and catching up. He wrote me back the following, which today brings me to tears:

Thank you and thanks to your team for keeping Wing Commander alive. I still remember the day I met Chris Roberts at some promotional event at some computer game store where he told me I should apply for a job at Origin. I did, and he hired me. How lucky can a guy be? Who gets to work on their favorite computer game franchise? Almost nobody. But I did.

I'm forever grateful for my good fortune, the friends I made on the way (like Paul Steed), and people like you who support the game that started my career. Thank you.

Pete, you were a great engineer and a better man. I’m glad to know that you appreciated those days at Origin, that you valued the experience that made so many of us happy and that you had pride in the incredible things you did and made. It’s always cold comfort, but the games and the stories your expertise made possible will live on past any of us. And you will be missed.


If you have a memory to share or would like to include your condolences on WCNews, please e-mail news@wcnews.com.