UnnamedCharacter has been intensely studying the early Wing Commander games lately, and he's discovered some tiny yet fascinating aspects of how WC1 was created. For instance, he's discovered that more than just the windscreen is transparent on the Hornet. A tiny row of six pixels that features in the iconic cockpit actually light up as if they can see through to the space background. It doesn't look like an error - just a very clever way of lighting up stuff on the dashboard. He's found similar pixel discrepancies in the briefing room and when looking at the Tiger's Claw as well. Shades pointed out that even some of the characters exhibit this phenomenon. I bet the artists never thought Wing Commander fans would still be scrutinizing every pixel nearly twenty-five years later! Follow the discussion and learn about more obscure Wing Commander findings at the CIC Forums. 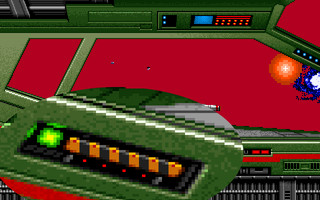 The cockpit of the Hornet is not airtight; there are holes in the side walls. Bare with me, I will try to explain using a series of images.

The first row of images are the familiar cockpit views. The second row are the masks, which indicate the "transparent" areas of the cockpit views; I highlighted a series of stray pixels. These pixels line-up with what could be considered controls in the side wall of the cockpit.

You can fairly easily see the effect of this in game play. Just line-up the Tiger’s Claw or the stellar background, move the ship slightly and you will see these little dots change colors to reflect the background. You can also see these pixels change when taking enemy fire.