ScoobyDoo has made big progress importing his new Bearcat fighter into the Unreal 4 engine. In this new environment, he's been able to add tons of detail to the cockpit, hull surface and landing gear. Although he's known for adding lots of stuff like this to his ships in the past, he's being careful to walk a fine line and avoid making his ships deviate too wildly from the baseline Wing Commander examples. If you'd like to see more of the spaceframe itself, check out the previous post here. This design should be reading to import into various projects that use the Freespace 2 engine soon. 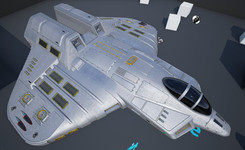 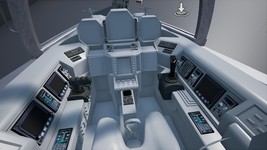 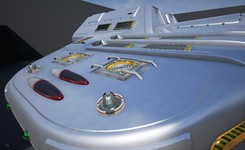 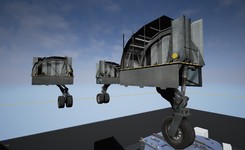 My main line of thinking was, I can't do a million greebles like S.C. models, it just wouldn't look WCish (heck even the Kilrathi isn't nearly that greebled). I decided to go with panels and small details. I would have liked to added more panels but it would start looking like it was patchworked. The big thing I'm going to have to deal next with is panel scribing (like what you use to do with physical models to bring out panel lines). That's going to take some rethinking on my part. The panel lines I've used in the past look ok, but somehow I don't think they would fit in nicely here.

Cockpit is finally coming together, I merged some of mine with one of the SC cockpit models, reworked and optimized. I think SC is using some sort of tessellation in their meshes and I'm not familiar enough to work with that. Wheels are fully animated, however until FSO support dae animation, they won't be useable in FS2, too many separate moving parts.