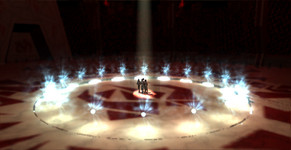 The Austin Chronicle has printed a preview of tomorrow's Austin Civic Orchestra concert featuring Wing Commander. The article notes that the music was originally created locally by George Oldziey at Origin, and this year's successful Kickstarter campaign gets a nod too. It also points to this really fun writeup from 1995 that talks about WC3's soundtrack and the burgeoning field of video game music. Be sure to check it out!

The Austin Civic Orchestra kicks off its season this weekend by embracing the Past & Present. Video game enthusiasts might be interested in the "present" portion of the show with locally composed music from the seminal Wing Commander series. It wouldn't hurt for you to hear some Beethoven either.

The "past" half of the show consists of Ludwig van Beethoven's "2nd Symphony." We're told he's a pretty talented guy, but if anything is going to get the kids to the symphony it's a video-game tie-in. In this case, ACO will play music from World of Warcraft and a Wing Commander Suite. You've likely heard of the former, but Wing Commander might not be as familiar.

The Wing Commander series developed by Origin put local game designer Chris Roberts on the map in the mid 90s. The spiritual successor to the outer-space dogfighting series, Star Citizen, is currently in development by Roberts with reports of funding over $50 million.

Wing Commander III and IV incorporated some of the most cutting edge technology of the time: CD-ROMs, live-action cutscenes (starring Mark Hammill and Malcolm McDowell no less), and the sweeping MIDI orchestration courtesy of local composer George Oldziey. The soundtrack to the game is a testament to the beauty that can be found in technical limitations with MIDI versions of the usual orchestra instruments. This gives the sounds an electronic timbre. It's like aural pixelation.