Wing Commander in Concert This Weekend! 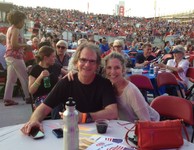 Here's a reminder that George Oldziey's Wing Commander suite will be performed this weekend by the Austin Civic Orchestra. The show will be Sunday, September 28, 2014 at 3:00 PM at the Anderson High School Performing Arts Center. Austinites are really lucky to be so close to this! There will be other video game-inspired music performed, including a selection from World of Warcraft. Order tickets now for $10-12. If you can make it, let us know!

George's live album is also coming along well. The orchestration is more than 3/4ths complete now and the project is still on track to record in Bratislava starting October 31. If you'd like to hear a preview, check out the Austin Symphony Orchestra performing a Wing Commander medley at this year's amazing Fourth of July performance!

I'm right on schedule, and VERY much looking forward to hearing the music finally played (and recorded) by a great orchestra!

As a side note, the Austin Civic Orchestra (not the Austin SYMPHONY Orchestra, which has already performed the Wing Commander Suite) will be performing the suite in a concert on Sunday, September 28th at 3 PM here in Austin, TX. They are a fine ensemble for being an all volunteer organization, and should provide a good performance of the work. If you are in the area that weekend and would like to hear the performance book your tickets now!