Klavs has been working on WC2-inspired fighters as of late, and this Drakhri adaptation is next in line. While the Drakhri's wing shape may remind you of a certain flying pancake, this multi-role medium fighter is in fact an entirely distinct design. Note the missile rack above the cockpit! 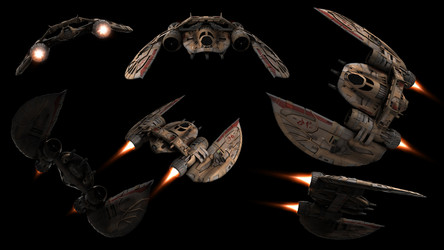 We had been reporting faster, more heavily armed Dralthis for almost a year before a very prim and proper intelligence briefer sat us down and showed us the error of our ways. These, he intoned gravely, were of from a completely different sect of clan manufacturers and thus intrinsically and deeply distinct from the Dralthi line. We were henceforth to make careful distinction in our combat reports, and duly note the myriad and subtle (yet distinct) differences between the two craft, despite the fact that both Dralthi's and Drakhri were frequently operating in the same systems, even from the same ships!

Subsequently, claims of Dralthi's and/or Drakhri dropped to near zero. Claims of 'pancakes, batwings and medium sized cats' went on per usual.