The massive sci fi ship size comparison collage has been tweaked a bit since it originally made the rounds late last year. Wing Commander ships have been repositioned, and space sim cousins such as Star Citizen and Space: Above and Beyond have been added to the melee. DirkLoechel, the creator of this work, visited the CIC Forums to talk about the size discrepancy of the Kilrathi Hvar'kann dreadnought. In order to scale the ship more along the lines of its in-game presence, he took the 22,000 meter figure and imagined it actually meant feet, and then he converted feet back into meters. This makes some sense within the context of Wing Commander 3 by itself, although Prophecy was the first game to actually feature a spaceflight engine with capships and fighters to scale. We also know that the Victory Streak stat was not a typgraphical error due to length confirmations in False Colors novel and Star*Soldier manual, but at least the mystery here is solved! The updated 13 megabyte image is available here. 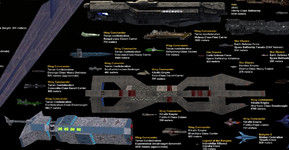 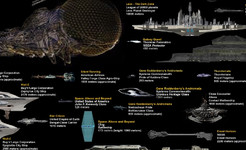 Hello. I made this chart.

Wing Commander, specifically Wing Commander 2 and 3, are games I remember extremely fondly. Not only were they pleasantly challenging without making you insane (like seriously oldschool games - anyone here even heared of Psygnosis' Obliterator?), they also had a greatly scripted and executed story, an original, somewhat trashy feel (especially WC3!), and were just plain fun to play. Too bad that kind of game seems not to pass the producer test anymore.

The assortment was indeed to show most main ships - completist me. ^^ I'm quite happy I remembered most of them by name.