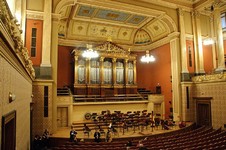 Since the conclusion of his successful Kickstarter last month, former Origin composer George Oldziey has been in negotiations with symphonies all over the world to find the best musicians and make the most efficient use of the funds collected. He's selected Prague's prestigious Dvorak Hall with the Czech Philharmonic Orchestra to record the album! Since the Kickstarter basic goal was exceeded, he's used the current proceeds to plan about 30 minutes of finished recording with the orchestra. Although George had a backup plan to fill the remainder of the album with digital tracks, fans have been asking how to maximize the amount of live music.


After our HUGELY successful Wing Commander Music Kickstarter Campaign, which was launched to raise funds to record at least 15 minutes of WC music with a full symphony orchestra and choir, I received bids from orchestras from all over the world! I promised to provide AT LEAST 45 total minutes of music for a CD and digital download (between the orchestral versions and MIDI sample based arrangements) while trying to get as much of it done with the orchestra as possible. After very careful consideration, weighing things like cost and quality of musicianship, I've decided to record the music at the historic Dvorak Hall in Prague with the Czech Philharmonic Orchestra! This is a world class group of musicians that will be playing the music in one of the most beautiful and best sounding halls in the world! Right now we are scheduled to record the music in the latter part of October of this year! 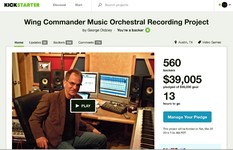 The next step is a supplemental campaign to expand the scope of the album. With an additional $14,000, George can reach the full 45 minute mark! This is good news for both past pledgers and people who missed the original drive, and it's more than $10,000 less than the original estimates for the full track list. In order to provide a broader range of options this time around, the additional funds are being collected via Fundrazr. Unlike with Kickstarter, Paypal is now accepted and numerous countries/currencies are supported. People can click on "buy as a guest" during checkout to pay with just a simple credit or debit card as well. People who pledged at a certain level last month are also welcome to add an additional pledge in order to reach a higher combined tier if they'd like. If you know a Wing Commander fan who missed this earlier, please help spread the word! Add to the supplemental campaign here.

With the current amount raised from the initial campaign, minus the percentage that Amazon and Kickstarter received, we have enough funds to record 30 minutes of music with the orchestra and choir. So, we can settle for having 30 minutes of orchestral music with 15 minutes of MIDI music, OR have an entire CD of 45 minutes of music with the orchestra by raising another $14,000 through this FundRazr campaign! My preference is definitely for the latter! I will honor all the same rewards from the original campaign that are based on the various pledge levels! And if for some reason we don't reach our goal but have accumulated more funds I will put that money towards having even more sampled based music into the product!

Thank you again for all your wonderful support! Let's make this a recording for the ages!