Klavs' latest renders show off some of the hot fiery bits on the Hornet and Scimitar. The main engine flares, reaction control thrusters and engine muzzle blast are all on display here. Each of the ships are designed for more than good looks - they were thought out to be functional in an animation or active project of some kind. The stills already look great as is, but we're anxious to see everything in motion some day! 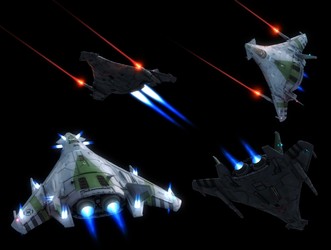 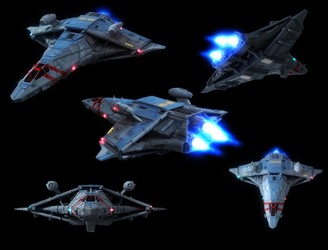 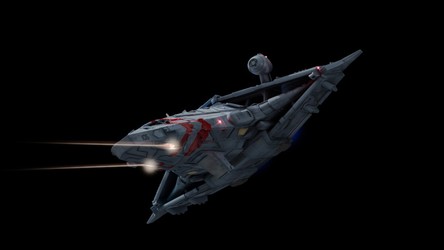 For my version (emphasis mine, this is non-cannon, of course) of the WC universe, the idea is that all ships have a limited form of non inertial drive, but it's limited to 2-5 gees based on reactor power vs ship mass. (Lighter ships built around big reactors can achieve greater maneuverability at the cost of payload armor and reaction mass) For higher accelerations (Afterburner) you have to burn propellant through your fighter's hot nuclear reactor. This gives the ships the ability for planetary VTOL as seen in WC2-4, and justifies (barely) the existence of light fighters vs just firing a bunch of AI driven missile busses. Ships with inertial-less drive can usually always recover, provided the mothership isn't too far away or moving too fast by comparison.

For larger ships it gets exponentially harder to accelerate using large masses using the (let's call it the repulsor drive) over 1.5 gees. So you typically use the drive for maneuvering and working gravity for the crew, but still have to burn reaction mass by passing it through your reactor to move the ship anywhere useful. Thus you get slower maneuvering capital ships, quick fighters with fuel limitations. RCS thrusters are used during recovery and hard manuvers because it looks cool. Otherwise you're flying on the inertial drive. (Or Repulsorlifts, if you check the WC3 checklist. They're somewhere after Batman's Atomic Batteries and Turbines.)

This is my full-of-holes working theory, anyway. Spacefighters are more the realm of science fantasy, but I like to have a LITTLE justification here and there in the space-going-aircraft-carrier-analogy-thing. :)

On the other end of the spectrum is the Scimitar. Very few RCS thrusters, but great big impulse pods to maneuver the mass of the ship around, and, presumably, a big reactor(s).