Klavs has completed another terrifying Kilrathi capship to accompany his Fralthi and Snakeir. The Ralari class destroyer has a smaller and more nimble look to it while simultaneously appearing quite menacing. In addition to the reds and browns of the hull, the orange interior lights are a nice accent. It's definitely not something you'd want to stumble upon in a Hornet! 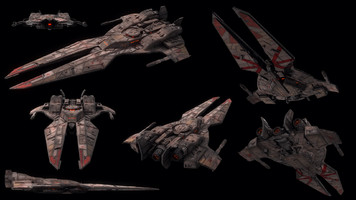 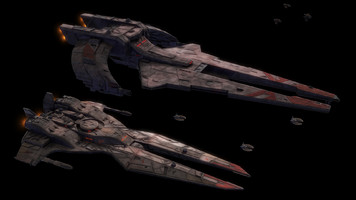 Thorskald's charges have neatly sliced off the top of the dome. No bodies accompany the spinning pie plate as it is blown upwards, tumbling off into the void. The bridge crew are well trained. Even with the sudden decompression, they have all managed to grab handholds, save their lungs, and shift to the task at hand: survival.

Kilrathi have a useful vacuum exposure of approximately twelve seconds: an eternity. To help things along, jagged holes begin soundlessly materializing in vital organs, limbs, and skulls. The last one begins to realize what is happening. His fangs are barred in a silent challenge, but the rest of his head goes missing.

Reavers jump down onto the deck, shoving aside corpses. We plug in to the ship's vital systems. Isolating command systems, sealing compartments, venting atmosphere, dropping radiation shields. Moving from the secondary breaching location, the assault team goes to work.

It seems we might actually get away with it.