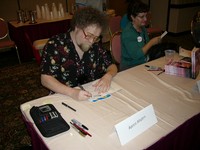 Terrible news to report today: author Aaron Allston passed away yesterday at the age of 53. Aaron Allston was a traditional ‘pen and paper’ game designer, one of many who made the transition to Origin Systems in the late 1980s and helped give the company its distinctive culture during the early years of the Wing Commander and Ultima franchises. Today, Aaron is best known for his incredibly successful (and critically acclaimed) Star Wars novels, but for hundreds of thousands of Wing Commander pilots, he was our first portal into a new universe. He had a monumental impact on shaping the Wing Commander universe and drawing players in to the first game in the series, and the world is poorer for having lost his talents.

Aaron’s mark on the Wing Commander franchise was indelible: he was the man behind Claw Marks. The “Onboard Magazine of the TCS Tiger’s Claw,” Claw Marks was an astonishing piece of in-universe fiction included in the box of the original Wing Commander. The booklet didn’t tell you how to play the game, it treated you like you were a 27th century fighter pilot catching up on the news between missions. The ship specifications, pilot-of-the-month bios and in-universe editorials became the standard for the franchise going forward. Chris Roberts has always sought for an immersive game experience, and the inclusion of Claw Marks meant that Wing Commander offered it before the player could even insert the first disk. Aaron went on to serve as designer and writer for The Secret Missions, Wing Commander’s first mission disk. The Secret Missions took Wing Commander’s existing structure and a collection of cutting-room-floor ship graphics and turned them into the epic story of the Tiger’s Claw’s trip behind enemy lines to battle a Kilrathi superweapon. The product was an unexpectedly massive success. Wing Commander players clamored for more action in their new favorite universe and in the process set the stage for first years of physical game “add on” disks and then DLC development that continues today.

While The Secret Missions was Aaron’s last published involvement in Wing Commander, it was not his last time writing in the universe. In 1995, Chris Roberts brought him back into the fold to create the series bible for a Privateer television series. The television plans were bold to the point of insanity: Origin would simultaneously produce a pair of Privateer games, Privateer 2 and 3. The first season of the television series would begin after the release of Privateer 2 and run for a year. Game and show would have different protagonists, but the two would team up in occasional crossover episodes… and then after the conclusion of the show, would appear together in Privateer 3 to finish the series’ year-long story arc together (if that wasn’t enough, Aaron also pitched the idea of episodes that would tie in to the then-in-production Wing Commander IV.) Plans for the game and series fell through, and an entirely different Privateer 2 was developed instead. Aaron once remarked that he thought this for the best; his initial pitch had gone on to be “sexed up” by Hollywood (including the addition of a non-ironic planet of Amazon women.) You can read Aaron Allston’s original Privateer the Series pitch here. 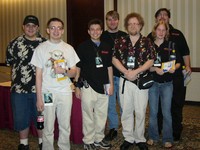 I was lucky enough to know Aaron. Our first interaction was in 1995; he was tickled to discover that an early iteration of our Wing Commander Encyclopedia featured an entry for “Captain Aaron Allston” (as he is credited in Claw Marks) along with a hand-scanned picture of the magazine editor cartoon. Over the years, he was always generous with his time in answering questions about his work on Wing Commander and the early days of Origin Systems. In the early 2000s, Aaron was a regular fixture at Dragon*Con. The CIC staff would always make a point of attending his Star Wars panels and then after presenting him with stacks of Claw Marks to sign. I can’t say that he enjoyed the attention, but he was always thoroughly happy to stick around and sign everyone’s booklets and share a few words about the old days. It is almost appropriate that he passed away on Thursday during a convention appearance: he was the rare combination of a genuine talent and someone who was always willing to go out of his way to interact with his fans.

If you knew Aaron Allston or if you were influenced by his work, please let us know in the comments.