Klavs has put the finishing touches on another fun model - the Venture corvette. Although the ship is an uncommon sight in the games, its exotic rarity and an awesome story set aboard the TCS Johnny Greene in the End Run novel have cemented the design as a fan favorite. As usual, there are also plenty of small details on the model that'll make you want to zoom in and scrutinize up close. There's also a bonus image that compares the ship to a B-52! 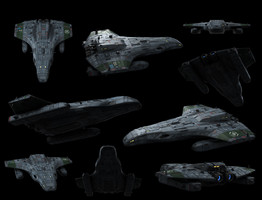 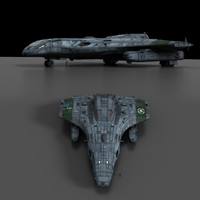 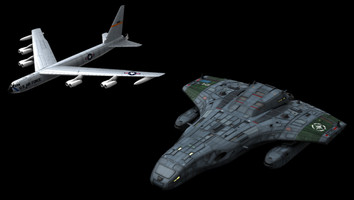 A Venture corvette can easily do a barrel roll in standard atmosphere, it is simply a matter of timing and altitude.

Also, if you were wondering what's up with the ordering 3D prints of Klavs' design, here's the latest on Terran Fleet Supply:

Still working on it. Think I'll stick with Shapeways for now and keep the shop open there. They won't let you order any of the ships with problems, so the ones that are still available for purchase should print okay.

I'll eventually be working on some lower detailed models for the problem ships that should print with fewer problems.