Broadsword Fits In With Fleet Colors

There's a bit less gray these days in the Wing Commander Last Line of Defense mod. Red Baron has textured ScoobyDoo's Broadsword to match the popular Confed green paint scheme. The first shot below also shows the heavy bomber being escorted by a Rapier and Ferret, and there's a very sharp five-view layout that details the model nicely. As the ships begin to come together, Deathsnake is starting to build the plan for storyline dialogue, although a formal call for voice actors is probably still a little ways off. 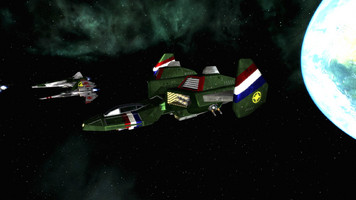 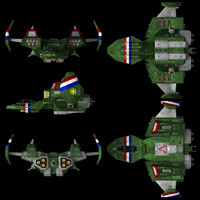 Red Baron: Scooby's model doesn't really look very Broadsword-y when viewed from an angle because it's all sharp edges, but if you look at the silhouettes you'll see it's spot on.

ScoobyDoo: The Broadsword was bits and pieces from Lar's Broadsword and my Hwacha (which was originally a Broadsword) all mashed together. 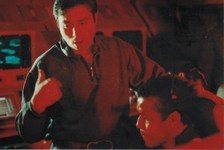 Chris Roberts and the Cloud Imperium team have achieved another record-breaking crowdfunding milestone. They crossed over $25 million today, just one month after hitting $20 million. As the number of contributors grows and special offerings keep popping up, Roberts Space Industries has seemingly gained the ability to print money with no end in sight. A huge 36x12 inch mousepad has gone on sale featuring the logo of Origin Jumpworks, a fighter manufacturer in Star Citizen named in tribute to the company that started it all. The latest proceeds will go towards beefing up the preliminary alpha release of their game. As a further stretch goal, at $27 million Star Citizen will gain a unique new trading race.

At $25 million, you allow us to build a stronger infrastructure for the Star Citizen alpha test:

Enhanced Alpha – We will use additional funding to build a wider alpha test than we had originally intended for the first phase of Star Citizen’s launch. The initial plan was to first launch servers in North America and then expand to areas such as Europe and Australia to decrease latency in these areas, perfecting the game as we improve the experience around the world. This funding will allow us to invest in a wider infrastructure for our early testing, spinning up remote servers earlier. Hitting this goal will also allow us to increase the number of remaining alpha slots. Extra alpha slots not only means more Star Citizens will travel the ‘verse at launch, but that we will receive more feedback and more stress testing. This in turn will allow us to better balance and enhance the Star Citizen experience!