Sabres Dance In The Dark

Klavs' artistic new wallpaper image is titled 'Sabredance'. It coincidentally stars the same F-57 Heavy Attack Fighter that was recently added to Howard's Concordia Hangar. It's a popular ship lately! The scene is eerily lit by their doomed target, one of Klavs' dark and imposing Snakeir carriers. There's also an amusing piece of bonus fiction below that ponders what 27th Century critics might think of this piece. 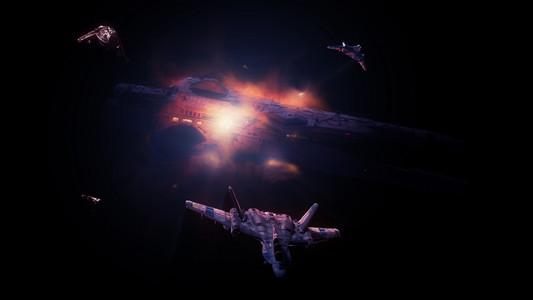 With 'Sabredance', the artist has simultaneously failed to capture the emotion of the questionable 'victory' at Vukar Tag, and, most dourly, spurned a multitude of hackneyed 8-bit impersonators, each more terrible than the last. The emergance of 'veteran art' is a regrettable corollary to disarmament, and a continued reminder of the barbarism of our recent past. The 'talent' of this artist is best left in the cockpit, or better yet, consigned to the trash heap of history.