This time Klavs has outdone himself in creating one of my favorite ships, the Excalibur! This particular craft has been modeled by many people in the community over the years, and today's latest example is one of the finest we've seen yet. And it doesn't just exist on your monitor! The F-103 3D print is available now at Terran Fleet Supply! Two versions are available: one is larger and to scale with most of Klavs' other fighters, and another is a cheaper and smaller variant that is similar in actual size to the other ships. Check out the excerpt from Maniac's autobiography below and then grab one for your fleet! 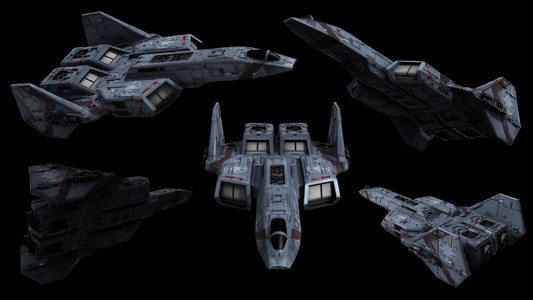 Chief Coriolis' crew back on the Victory had worked hundreds of hours getting our ships ready for the mission. But the Excaliburs had seen some hard use in getting us all the way to Kilrah's front porch, and they were finicky to maintain under the best of conditions.

The asteroid bases were reasonably well stocked, but they had been seeded before the Excalibur had fully left the drawing board. Some of the bleeding edge tech that gave the F-103 such an edge in space gave it a major Achilles heel when it came to the supply chain.

Peters had pulled a main stabilizer quad from 300. She frowned at it for a minute, then strode purposefully toward the parts cage. After a few minutes more, I noticed her back under her own ship, 303.

The deck was cramped, Flint had to come right past where I was working to get over to 300 again. We locked eyes as she went past. She was lugging the good stabilizer quad from her own ship over to Blair's.

He saw what was going on, you could see it in his face. But to broach the subject was unthinkable, even impossible.

Despite everything, it was Chris Blair who had the best chance of completing the mission. The rest of us had become expendable.

It was neither a hard decision nor an easy one. It was simply the decision that had to be made. I followed Flint's lead, no orders or discussion required.

Soon we were working side by side, wordlessly pulling good parts from our birds to keep Blair's in top condition.

I can still see her: Filthy flight suit, face oily and grungy, hair greasy and matted, dark circles under her eyes.

I'd have married that girl.