Here's a closer look at Klavs' heavy Gratha fighter. It looks great on the computer screen, and it would look even better sitting on your desk! I've always thought the Gratha looked like an tough alien menace, but there's been some recent discussion at the CIC Forums about how human the design looks compared to the rest of the Kilrathi fleet? What do you think? 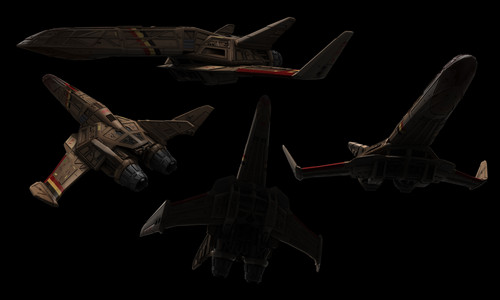 The Gratha gave Confed procurement a heart attack when they first arrived on the scene. They thought the Cats had developed a counter to the Rapier before it even entered service. And, if you squinted, they did kind of have the same silhouette, but the similarities stopped there.

We learned quickly that the Grath was actually more of a big fighter-bomber, more on par with the Raptor. But whether it was inter-clan rivalry among the spacecraft developers, prejudice against a quasi-human looking design, or just plain bureaucracy, the experienced pilots didn't seem to fly them much. They would be a decent enough fighter in the right paws, I guess, but the systems management was way more complex than the average Kilrathi fighter and the training and maintenance never really caught up with them. A wet-behind-the-ears fourth fang was typically in way over his head, with only a few exceptions. Later variants added a second pilot to handle the workload, and they found a niche as a halfway decent strike craft. That big nose could carry a lot of hurt, and they could run in fast and hit hard.

I called them 'Schnozzles' at first, but nobody else seemed to get it, so I quit.