Here's a correction to something we mentioned last week. The collage of ships made by ScoobyDoo don't represent all the vessels that he's made - those were just the fighters! He's produced a new image that shows his capital fleet, except for the mighty Behemoth. There's a really awesome sense of scale when comparing these larger warships.

Additionally, Scooby's already prepped a new take on the heavy Raptor fighter. His version is especially heavy! It's supposed to suggest a relationship to the Thunderbolt. The later shots even show what a two-seat variant would look like, and he's depicted this design cruising past a slick planetary ring. 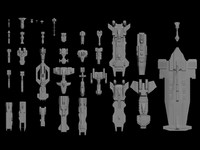 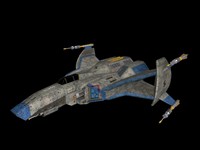 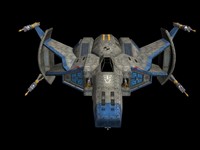 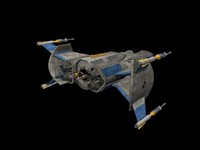 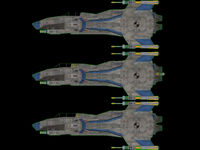 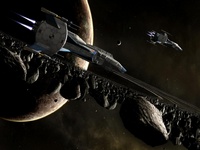 Also a variant on the Raptor, a second altered version will be coming as soon as this one is done. Deathsnake had some ideas to return it to wc2-3 era. Right now armament includes 2 heavy mass drivers, 4 heavy? lasers and a stormfire, plus a rear turret. About the same size as the thud.

The texture has a single large bay for a single launch torpedo. Generally I keep the heavy fighters with just one torp. Oh ya, there's quite a bit of Thunderbolt in this model. The whole nose section, the intake section, engine section and even the turret section.