Hitting the Highlights from a Wacky Week 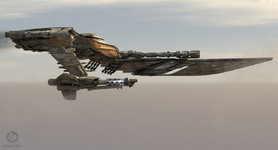 The media whirlwind surrounding Wing Commander creator Chris Roberts' crowdfunding campaign has continued to take the gaming and mainstream press by storm. It even got a full writeup in Forbes. A simple Google search will bring up dozens or hundreds of related articles, but a couple caught our attention!

First up, GoodOldGames has posted a ten-question interview with Mr. Roberts. It hits quite a few good topics, and Chris' answers are extensive. Here's a couple select quotes:

You're probably best known for creating the Wing Commander series. What was the inspiration behind the first game?

The biggest inspiration is Star Wars, of course. What teenager didn't leave the theater in 1977 and dream about flying his own X-Wing? So Wing Commander was very much the culmination of that dream. Not just the technical aspects of flying a starfighter, but that idea of making you the hero, putting you in the 'movie.' My design philsophy has always been to trend towards a visceral experience, and Wing Commander taught us so much about how little things like making the hand move with you on the joystick or actually showing damage to your cockpit as you fight are incredibly important. Of course, it's not just Star Wars... Wing Commander takes a lot from the same classic World War II air combat films Lucas based his epic on, and in many ways it does so more directly. You're in an aircraft carrier in space and you're fighting an alien empire that stands in for Japan in this island hopping campaign across the stars. I like to build my games' stories on elements from history, which I think you'll see again in Star Citizen.

Will the story of Wing Commander V ever be concluded? Will we ever see a sequel for Freelander or Starlancer as well?

Wing Commander Prophecy wasn't me. I thought the team did a fantastic job carrying on the legacy for that one, but my involvement in the game series ended after Wing Commander IV. So, I've never been especially invested in the story they set up, with the new enemy replacing the Kilrathi. I'd love to make another Wing Commander – and I spent a lot time thinking what I would do story wise - but I’m only going to do that on my own terms. I created and used to own the IP. I’m only willing to go back if I can be assured of guiding it going forward.

Can we expect any kind of Easter eggs or any sort references to your earlier games in Star Citizen?

Count on it. In fact, have your readers take a close look at the trailer we released at GDC Online... 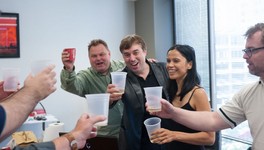 The major print newspaper Austin American-Statesman posted a nice article on the conclusion of the campaign and included pictures from the office during the team's final celebration. Check out LOAF's arm toasting in from the left!

Roberts — who flew in from Los Angeles — and a small group of team members and backers were set up Monday in the downtown offices of Austin game studio LightBox Interactive, where they completed a 24-hour web-streamed celebratory countdown to the funding announcement, which they toasted with champagne in plastic cups, broadcast live to the gaming world.

“We’re going to make the best damn game ever for you guys!” Roberts told the Internet audience as the clock struck 1 p.m.

As eye-popping as Star Citizen's $6.2 million tally is, the single most amazing thing of the week might just be that Kotaku had something nice to say! "Wing Commander’s Spiritual Sequel Sets a New $5.7 Million Video Game Crowdfunding Record:"

Now, Roberts has the benefits of being synonymous with Wing Commander, one of gaming's true cultural phenomenon. But he's also making an ambitious new game on a platform that's taken for granted in a genre that's supposed to be dead and forgotten. And when news of Star Citizen first surfaced, it was impossible not to gawp at the huge sum Roberts was stumping for. So the fact that $2 million goal was eclipsed by a margin of more than double is a pretty impressive accomplishment.

Hit the Comments link below if there are any other neat articles that you'd like to point out!