Klavs has built a great new scene with his Scimitar model. This pair of medium fighters is sandwiched between a small moon/planet and a red aura. Wonderful textures and lighting grace these CF-105s and make the scene look almost like a sharp painting. They're also a tribute to Sylvester and the VT-10 Wildcats - check out the squadron logo! 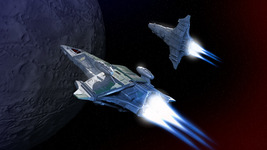 Here's the VT-10 Scimitars on a training flight.

The Roberts Space Industries website continues to get daily updates. Today's fiction teaser deviates from the so-far-normal by including a short audio recording. Listen as the cargo ship Goodman runs into a bit of trouble: 2262: The Neso Triangle.

Today's update also features a new commlink entry to go along with the current poll about your controler preference.

This may be the question that separates the Wing Commanders from the Freelancers! In the early 1990s, it was common–thanks largely to Wing Commander’s massive success–for a new PC to include not only a keyboard and mouse but a simple flight stick. Ten years later, with the genre less popular and PC manufacturers eager to cut costs, the idea was so unthinkable that Freelancer needed to be designed in such a way that it would only support gameplay using a mouse.