We talked about Wing Commander's first big licensee, Zanart, for Wing Commander III. Well, they produced a similar set of material for Wing Commander IV, which included a hat, two shirts and two pieces of Chromart. The artwork used was the 'poster' style Wing Commander IV art and an oddly less iconic choice--a shot of a Lance landing on Telamon against a blue backdrop. This time around, the game actually came with an advertisement!

At the risk of getting too personal on Wing Commander IV Day: I remember loving my landing scene shirt. My mother bought it for me after the game came out and explained she'd picked that one because she thought I'd like the one with the ship more. I was a Freshman in high school and I loved it. Somewhere I have a student ID picture showing young LOAF with a bandaged eye wearing a Wing Commander IV shirt--pretty much sums up my life at that point in time.

The other big result of Wing Commander IV was the Universal Studios animated series. Developed by the team that created Exosquad, Wing Commander Academy ran for 13 episodes in late 1996. The recent DVD release proves that Wing Commander IV is still spinning off merchandise today! 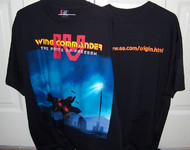 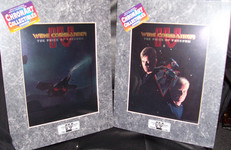 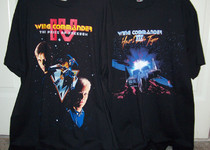