Progress continues to be made on Wing Commander TacOps Online. Avacar has implemented numerous bug fixes in the last several weeks and has big plans about the next phase of the game's development. After an upcoming flurry of coding is complete, the idea is to launch another beta test game that involves capital ships and their escorts. Meanwhile, capi has mocked up the current game using his counter tokens. A few of the shots below are a bit hard to see, but it's cool to see them in play. 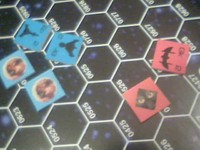 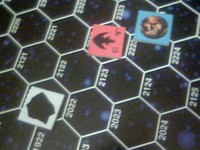 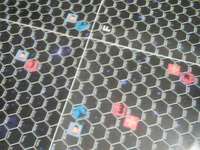 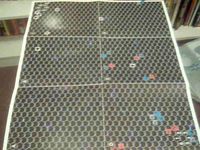 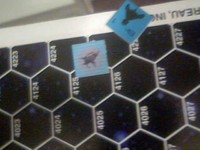 I intend to throw a full day or two's labour at this to finish off the End Phase Engine aspect of Flak Fire (a.k.a flak fire as a point defense). Once that is done, I'll launch Game 7, and possibly a Game 8. One of these games will be a medium-scale battle with 3 Capital-class ships and their fighter escorts. I'll launch another game at that same time if I feel we haven't sufficiently tested LOS or collisions yet. That second game would mostly likely be a true 'beta tester' game in that I'd only put 1-2 people in, and have them just run around smashing themselves into asteroids and trying to shoot past asteroids.