TacOps Pulls Out The Big Guns

Avacar has coded a number of new features into WC TacOps Online that make it easier and harder to blow up bad guys. On the offensive side, anti-matter guns, the phase transit cannon and flak blasts have all be implemented, which gives capships a hefty boost in battle. For those on the defense, "line of site" has been introduced which allows ships to hide behind asteroids and large objects. The project is getting very close to completing all the rules from Ironduke's tabletop game! 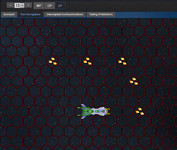 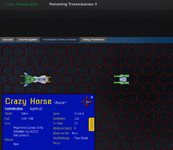 Continuing with my roll-out of new features, I am happy to announce that line-of-sight has now been coded. I haven't had a chance to do any testing whatsoever of this algorithm, but at least it isn't giving any immediate run-time errors.

Obviously, putting in the line-of-sight code has ramifications for all gun target acquisition and ranging. In this up-coming combat phase, if any of you feel like you should be able to target someone and cannot anymore, point this out immediately and do not submit your order. Also, as it is currently coded, there is nothing actually telling you that you're blocked by line-of-sight, you simply won't have the target listed as an option on your drop down in the command window.

I should mention that we're 'getting close'. Flak fire is the 2nd last game rule/feature yet to be coded. After that, only friendly fire remains before we have a 'game rule-complete' version of WCTOO.

When that happens, I'm going to kick us into Phase 6. This is a redefinition of all the timelines out there, and I'll publish updates to the appropriate threads when we get closer. Phase 6 will focus on a lot of the user interface requests/suggestions, as well as start work on the much-needed administrator tools (leading up to the eventual map editor).