Kevin Caccamo has begun modeling a classic Ralari destroyer from Wing Commander. The basic design matches the original quite well, but it has a bit of its own style too. Even without textures on the ship, the camera angle and dark blue background of the second image has a nice WC1 vibe going for it. 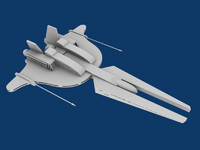 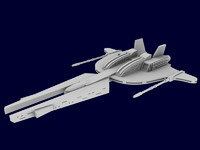 I'm making a new high-detail Ralari model for Woolie Wool's Wing Commander: Advance Guard mod for Saga. I'd like to try and improve my 3D modeling skills, so I thought I'd post it here for feedback.

The model itself is largely based on the game sprites (like the Rapier II in Hostile Frontier), but it also draws inspiration from the Claw Marks drawings and other fan art as well.